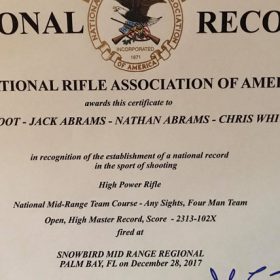 James achieved top billing among the four teammates, posting an impressive individual score of 595-39X. James posted an individual score of 200-17X on the 300 yard match, due in part to some excellent wind reading on the part of teammate Chris Whitney. In this particular discipline James utilizes a .223 Rem Match Rem/Age pre-fit barrel purchased through Northland Shooters Supply (26”, 1-8 twist, Varmint contour).

This Rem/Age pre-fit barrel is mounted to a trued Remington 700 receiver seated in Gary Eliseo’s Competition Machine F1 Chassis System. James elected to utilize the Vortex HST 4-16×44 for this particular rifle build, along with a CG 2-Stage trigger.

Criterion Barrels would like to extend our sincere congratulations out to James and his team. Per our policy on national record-setting customers, Criterion will be issuing James a complimentary barrel for his next rifle build project.